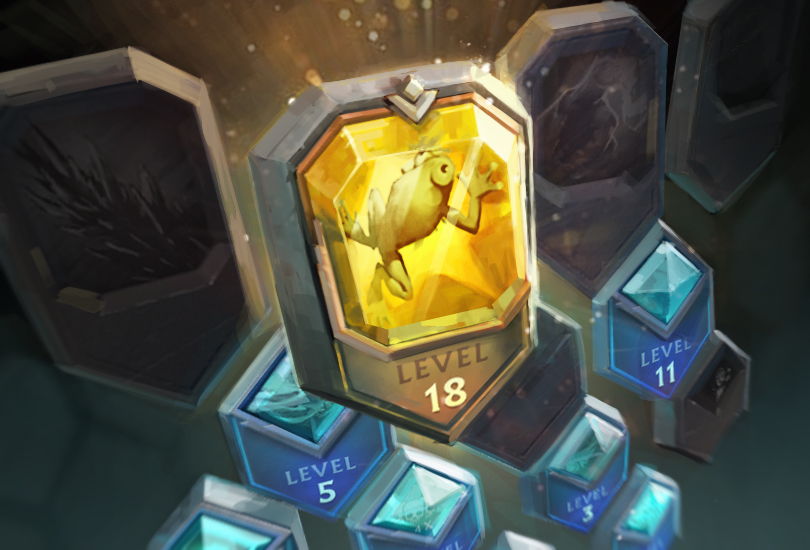 With spring just around the corner, it’s time to help cast off the mantle of winter with a refreshing influx of new features and content for Dota Plus. Featuring updates to Hero Relics, added Turbo functionality, a seasonal treasure, and refreshed guild quests and rewards, there’s ample for Dota Plus members to explore.

Hero Relics Update
Dota Plus Hero Relics now let you earn bonus Hero XP by increasing their stat values. Each Hero Relic gains a level whenever you reach a certain value for that specific stat. For example, Axe’s “Enemies Culled” Relic will level up every 50 times you kill an enemy with Culling Blade. When a Relic levels up, you will see an in-game overhead toast showing off the stat, and you will also gain Hero XP. Common Relics grant 5 Hero XP per level up, and Rare Relics grant 30 Hero XP per level up.

We’ve also revamped Hero Relic purchasing. You now have the choice to buy random Common Relics for 1,600 Shards or random Rare Relics for 8,000 shards. Regardless of type, you will no longer receive duplicates while purchasing.

Lastly, we’ve done a pass to fix up or swap out Relics that were not functioning correctly due to gameplay changes.

Updated Seasonal Quests & Guild Rewards
Today’s update also comes with a new set of Dota Plus quests to help haul in some extra shards for new relics and the Seasonal Treasure — offering up to 115,200 shards over the course of the season.

Rounding out today’s changes, the guild rewards for silver, gold, and platinum tier guilds have been switched for the season.

Dota Dragon’s Blood
Keep an eye out for the main trailer for Dota Dragon’s Blood releasing later today at 4:00pm PST. We’re excited to share another glance into the Dota universe before the series premieres on Netflix March 25th. 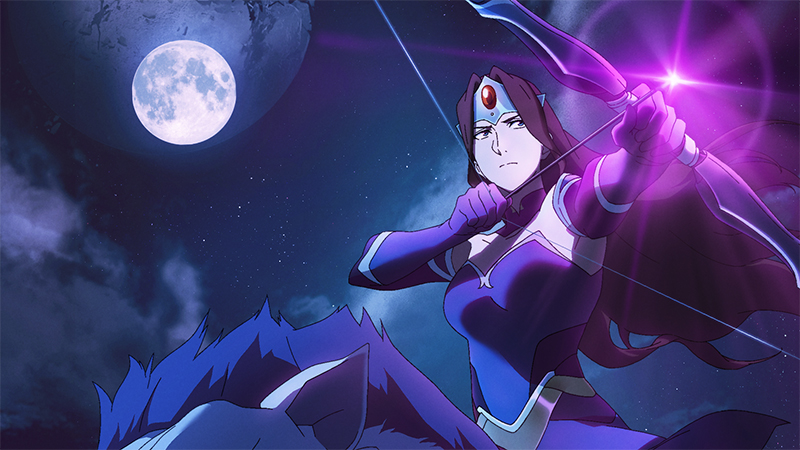 Featuring stunning animation from Studio Mir (The Legend of Korra / Netflix’s Voltron: Legendary Defender) and an epic story from Ashley Edward Miller (X-Men: First Class / Thor), Dragon’s Blood offers a new vision of the Dota universe for fans around the world to experience and discover. We’re looking forward to sharing this journey with you!

The Dota Universe Expands with an All-New Anime Series 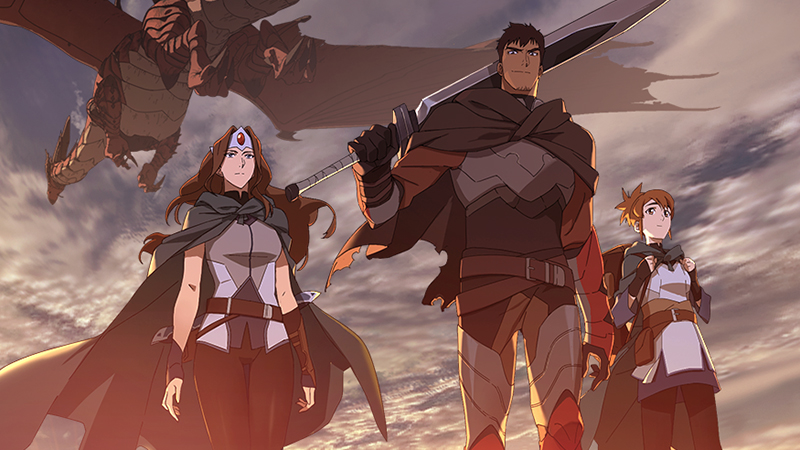 We are excited to share an all-new anime series exploring the Dota universe like you’ve never seen before — premiering on Netflix March 25th. Catch the announcement video below and check out the Dragon’s Blood section of the client as we reveal more updates in the weeks to come. 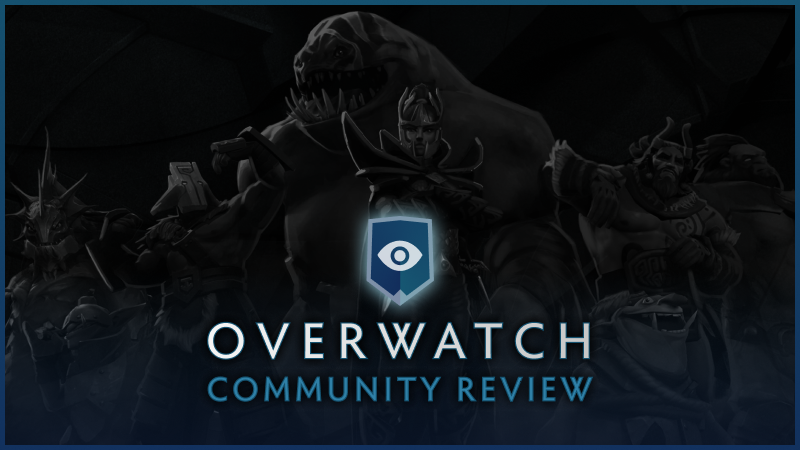 THE BASICS
———
Much like in CS:GO, Overwatch for Dota 2 provides a system that allows good-standing members of the community to verify the validity of reports flagging disruptive actions within games.

If a player chooses to review a case, they’ll watch a replay with pre-marked sections indicating possible negative behavior by a specific player. After reviewing the replay, they can choose: guilty, not guilty, or insufficient evidence for either.

Eligible players will occasionally be notified below their profile pictures that they have the option to review a case. Reviewers will earn an accuracy score for their efforts, and those who falsely convict will receive a lower score, eventually losing the ability to participate in Overwatch at all. To gather a pool of reliable reviewers, we’ll be enabling a growing number of accounts for participation over the next week or so.

REPORTING
———
Reports can now be made directly in a match via the scoreboard, or by selecting a player and clicking the flag on their hero portrait. Placing markers in the match will indicate to future reviewers where to look for negative behavior, and you can report the same player as many times as needed — meaning the more reports you file that are accurate, the more evidence the reviewers will have to make a case.

COMMUNICATION BANS
———
As noted above, communication reports are distinct from Overwatch reports and are still issued in the post-game screen. However, instead of preventing users from typing or using voice chat during a match, communication bans will now mute deserving players by default. As a result, other players can choose for themselves whether to unmute a chat-banned teammate or not. When a chat-banned player uses communications during a match, they’ll receive a reminder of their status in the chat window.

This week begins the Winter 2021 season of the Dota Pro Circuit and with it kicks off six straight weeks of daily pro Dota action; all day, every day.

In preparation for this season we’ve revamped the in-client watching experience and you’ll find a ton of new ways to watch and follow along with the scene. The “Watch” tab now has a comprehensive schedule and shows you the the current team standings. You’ll quickly get a snapshot of where things stand and what games are happening in the moment and where to watch. You’ll also be able to follow your favorite teams to make sure you never miss one of their matches. We’ve also updated the DPC app (iOS and Android) so you can follow along and track the new leagues and teams there as well.

If you’ve been following professional Dota for a while you’ll know we’ve explored a few ways for you to cheer on your favorite teams. In the coming weeks you’ll be able to back your favorites by purchasing content packages featuring in-game effects, sprays, emotes, loading screens and (of course) chat-wheel lines from your favorite teams. This content is coming straight from the teams themselves and they are submitting some great stuff for you to equip across your account.

We’re excited for the next two months of competitive Dota and we know you are too. The games are live and you can jump in and watch right now right here:

As we start a new year amidst positive news regarding the vaccine for COVID-19, we wanted to share with you our plans for the Dota Pro Circuit season 2021.

This year’s competition is slated to start on January 18th, and will consist of 2 seasons, leading up to The International 10. As previously announced, each season, will consist of a six week League portion leading up to a Major. After two seasons, there will be qualifiers for the remaining slots for The International 10 happening in Stockholm in August. The calendar for the two seasons is as follows:

Given that several teams experienced a lot of roster changes throughout the year and performance has varied among teams from the previous DPC season, we will not be using previous season’s DPC points as a way to seed teams into the leagues but rather selecting the top 4 teams in best form from each region to be directly qualified to the Upper division, while a series of qualifiers, closed and open, will determine the remaining 12 teams in both divisions.

At the end of the league, the top teams from each region’s upper division will qualify to the Major. For the first major, the distribution of the 18 slots will be as follows:

Due to feedback from fans and players, the schedule has been revisited to make sure all match times fit the regions play and watch times as best as possible. The new schedule is as follows (All times Pacific Time):

The six regional leagues will be operated by the following tournament organizers, who will in the following days share more information on qualifiers, broadcasting, show and talent information:

In an upcoming update, by the end of January, the DPC circuit will become integrated with the client, featuring Standings, Schedule and Tournament Information, as well as making it easy for people to follow their favorite teams and support them through purchasing seasonal Fan Support bundles.