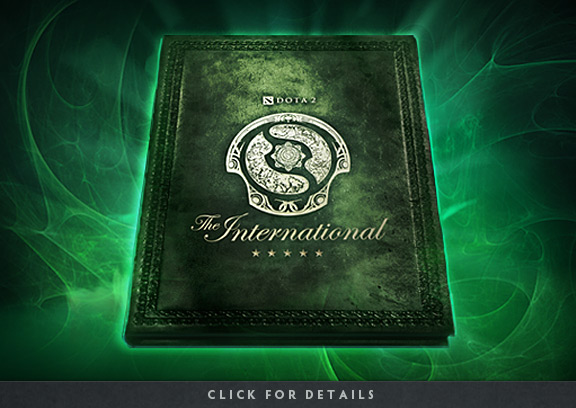 Each year we spend some of the planning time for The International trying to figure out ways to improve the connection between fans and the players in the tournament. We know that the majority of our viewers will be watching the tournament unfold over the internet, so we’d like to make it easier for an online fan to dig deeper into the event, the teams, and the players. In addition to wanting more detail, we know fans also love to compete with each other at predicting tournament results. This year we’re taking our first shot at addressing all of the these concepts, with an additional step that we hope will result in the tournament itself getting bigger and better as a direct result of fan enthusiasm.

Today we’re announcing The International Interactive Compendium, a virtual book that will keep you fully up to date with the state of The International, and allow you to play games with other fans for fun and bragging rights. In addition to making you eligible for special virtual item drops throughout the tournament, it’ll also allow you to vote on tournament-related community polls, such as the selection of which player should receive awards based on their play in the tournament. After the tournament is over, you’ll be able to browse your friends’ Compendiums to see how successful they were in their predictions.

Finally, to directly tie fan interest in Compendiums to the players themselves, we’re going to redirect 25% of the revenue directly into the prize pool. That means the total $1.6 million prize pool for The International is now just the starting point. The Compendium will be available in the Dota Store tomorrow morning at 10:00am PDT. For those of you planning to attend The International in person, your ticket purchase will include a Compendium.