With The International week rapidly approaching some of you might have noticed a few new things happening.

First let’s talk about Team Pennants. You can now purchase your favorite team’s Pennant, and proudly equip it in your Player Fan slot. When you’re watching a tournament match, your Pennant will contribute to your team’s Fan Level, which is displayed in the in-game HUD. If you really want to show those opposing team’s fans that they make poor choices in life, you can also upgrade your Pennant’s Fan Level by purchasing a Pennant Upgrade in the Dota 2 store.

Not only do teams benefit from Pennants by getting a share of the sales, equipping your Pennant will also make you eligible for Tournament Class item drops while spectating a match that your team is participating in.

Tournament class items are artifacts spawned by an exciting moment in a tournament match. They capture the details of the moment in a form that easily shown to other players. In addition, they allow you to jump right to the replay of the match, 15 seconds before the highlight occurred. Think of it like catching Babe Ruth’s baseball, except instead of Babe Ruth it’s Dendi, and the baseball is Pudge’s hook. 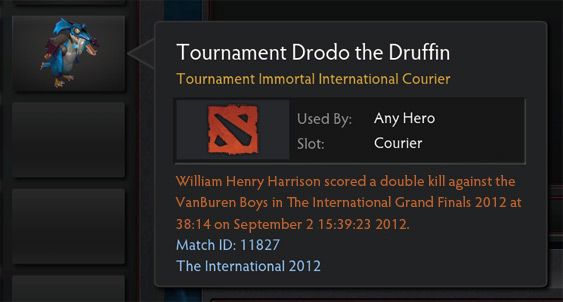 We’ve also added International Keys to the store, which open the new International treasure chests you’ve been finding lately. In addition to a variety of rare items, these chests have a chance of dropping limited run couriers that will only be available during the International.

Finally, in order to better support the cool ideas for Drow Ranger items we’ve seen on the workshop, we’ve changed her model break-up so that her hair and cloak are separate items. Her quiver is now a ‘misc’ item, her cloak is now a ‘back’ item, and her hair is now a ‘head’ item. This means that the Frost Spikes community item in the Spikes of Frost bundle has also been broken into two items. To make sure everyone gets the new items, players who own the Frost Spikes will now receive a bundle containing the new hair and cape item (which can then be equipped separately).