Did you see that kill?!

This week we’re shipping the first of a large set of planned features designed to improve Dota’s support for high end competitive play. Dota’s always held a powerful place in the competitive scene, so we’ve always wanted it to do more to help. From the data we gather throughout the system, it’s clear that many players, of all skill levels, find it entertaining to watch highly skilled players. So, in the same way that we’ve used the Steam Workshop to connect people that are creating a lot of value for customers who are enjoying it, we think we need to connect tournament organizers and professional players to their fans. Our next update includes the first step towards this.

This first piece is the Tournament view in the game client. Here, you can find current and past tournaments, and choose which ones you think are worth paying to watch. For the tournaments you’ve purchased, you’ll find a complete breakdown of the tournament’s matches, and be able to quickly jump in and watch them in your game client (whether it’s a live match, or a replay). Whenever you purchase a tournament, we’ll share the money you spend with the organizers of the tournament. We’ll be testing this immediately with The Defense, and if it works out well for everyone, we anticipate rolling it out to all tournaments. This won’t be the end of our features for tournaments, or players, but we think it’s the right first step – helping tournaments become more financially stable helps all the players participating in them.

Our goal here isn’t to replace web-based streams – we think those are fantastic, and we’ll continue to do the best we can to support them. Some customers will always prefer to use their web browser to watch matches. But we think there are some customers who’d like to invest in a higher fidelity, richer experience that they have more control over, and we hope to be able to provide that with the in-game Tournament view. We also believe that external companies providing financial support for tournaments is a crucial component to the competitive scene, and we have several ideas for how to provide them with features that will work in both the Tournament view and web-based streams. 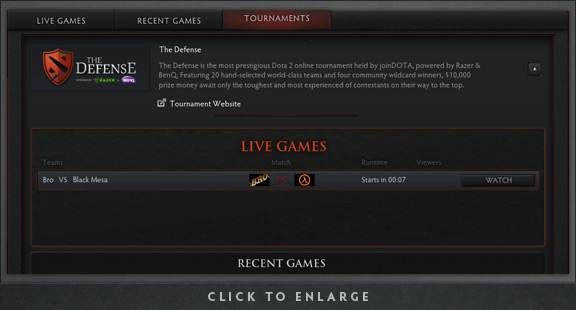 The second piece we’re shipping is better in-game support for competitive teams. The Defense will be the first test of our new Team system, where players identify themselves to Dota 2 as a competitive team, and provide a set of information about themselves. In addition to storing a variety of statistics about the long term performance of the Team, the game also detects matches between competitive teams, and uses the Team’s information to highlight the match. For example, here you can see our internal Valve Lambda team’s base:

Once we’ve got the kinks ironed out of the Team system, we’ll be opening it up to everyone, including the Team Matchmaking system where you’ll be able to find public matches against other organized teams. If you want to get a head start on building your Team in the meantime, we’ve put together a collection of example logos for you to work off. You can grab that here.

That’s it for the first competitive play update. As we said at the start, we have many plans in this space, but as always we need feedback to know if we’re doing it right. If you’re a professional player, a tournament organizer, a spectator, or just someone reading this blog, we’d love to hear what you think – both in terms of what we’re shipping now, and in terms of what you think we should be doing in the future to improve this space.

On a final note, a few days ago we released a bunch of info for those of you interested in making items for the Dota 2 Workshop. Even if you’re not an artist, it seemed many people found the Dota 2 Art Guide and Dota 2 Texture Guide interesting, so make sure you check them out.